The Alamo Drafthouse's Tim League on Food, Film and Austin

Share All sharing options for: The Alamo Drafthouse's Tim League on Food, Film and Austin 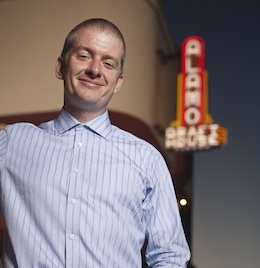 Tim League is the founder of the Alamo Drafthouse chain of dine-in movie theaters. As his empire expands to cities like New York and Los Angeles, he found some time to talk with us about Harry Potter scholars, the original, Japanese Iron Chef and Austin restaurants.

So, why a movie theater that serves food?
When we were first getting into the business, it was one of those things where we as operators could distinguish ourselves from other movie theaters. I think it was as simple as that. We'd seen the model a little bit, in particular at McMenamins theaters in Portland and thought it was a fun way to do something different with the cinema.

So we've always thought — which I think a lot of America thinks — at a traditional movie theater, prices for things like candy or popcorn are fairly high. So offering a reasonable casual dining experience in the same ballpark range would be our calling card, I suppose. Since the very first day, in the 90s, we've always been very interested in food and hired more experienced chefs that take the food to a higher level.

The system itself has changed over time; you originally had some sort of cart system?
Well, yeah, the ill-conceived cart system was only for about a couple of days. That was pretty early, it was more of a service model for the waiters. It wasn't something where we were doing it dim sum style or anything like that. It was just a means of getting the food out to customers in the aisles instead of carrying trays. But it didn't really work.

You do a lot of special events; we just interviewed [Alamo Drafthouse chef] John Bullington about the Harry Potter dinner and the Lord of the Rings trilogy. Where do you get ideas for the movies to do events like that?
It's a pretty collaborative process. John chooses a lot of the film pairings himself. Sometimes they're my ideas. Sometimes there will be people on the programming teams who also have ideas. And even quite a few come from customer suggestions.

Harry Potter is one where we have some very active and vocal customers that come up with ideas who are much more versed in the books. You know, I've read all the books but I haven't reread all the books. I don't consider myself a [Harry Potter] scholar. So our receptors are always just open for good ideas. I do a lot of food pairings for Fantastic Fest, where I serve as the programming director. I'm the one who's seen the films more than anyone else has. When we're watching movies now, we tend to think along the lines of what can we do special or interesting, and food pairings are definite one of our longest running tricks, if you will.

And now you have the Highball, too, so that really expands your options.
Yeah, the opening night party for the release of the new Harry Potter was a recreation of the Yule Ball at the Highball. Having the Highball for Alamo South Lamar is great, either for before or after the movie, or having premiere events. And for Harry Potter, where we have a large number of people coming to the movie, to have a space where everybody can enjoy the same thing together.

The Drafthouse also does Iron Chef-style competitions with films as the ingredients. How did that get started?
I was a fan of the Japanese TV show from long ago, before there was an American incarnation. I think that was probably me bringing that to the table. It started out, I think initially, that we would have guest chefs do the Eat, Drink, Watch Movies with Virginia Wood at the Chronicle. Then the idea just shifted that a really cool charity event would be to take the format of Iron Chef and turn that into a battle at the Alamo kitchen stadium and the ingredient is film. Every since the very first one it's been a great experience. I think I've been to every single one of them. Definitely one of my favorite things that we do as a theater. And it usually ends up being a relatively high ticket price because of the amount of food, the cost of the ingredients, but that's what makes it a really good charity event. People are willing to spend a little bit more for a very unique dining experience, and knowing that a chunk of the ticket price is going to charity.

I know you bring in chefs from around town. Who in Austin would you like to bring in to work with you?
One of my favorite chefs in town we've definitely worked with in the past. You know, I haven't talked to anybody at a restaurant I've been going to quite a bit, that I really just enjoy, it's fairly simple, but Justine's I've been going to a lot. I haven't really reached out to any of those folks, or any of the restaurants on the East side yet, but maybe we shall.

Last up: favorite restaurants in town when you can manage to get away from the theater?
For me, it's kind of no contest, it's been Uchi for a long time.