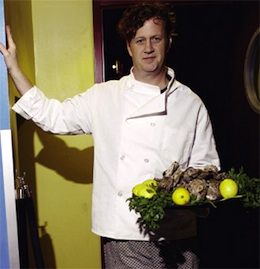 John Bullington is the executive chef of the Alamo Drafthouse on South Lamar, which means he's the one responsible for all those multi-course film dinners, like the upcoming Harry Potter Yule Ball and the seven-course Lord of the Rings Trilogy Hobbit Feast. We chatted with Bullington about how he comes up with the menus, his favorite movie, and his love for cooking whole animals.

You used to work at [the beloved-yet-shuttered] Mars; how is being a chef at the Alamo Drafthouse, at a movie theater, different from being a restaurant chef?
Mostly it's the volume. You know, when I was at Mars, it was 100, 110 covers a night? this is more like 3000 in the busy season. Also with Mars I really ended up using a lot of that for this job because our menu was very eclectic and global. At the Alamo it's always something different, Spanish, Polish, English, Japanese, Russian you name it. That was helpful for the Harry Potter dinner we've got coming up. But, yeah, mostly the volume. How am I going to feed all these people in the next hour?

How do you approach research for a movie-themed dinner, like the upcoming Lord of the Rings trilogy dinner or the Harry Potter dinner?
Well this is the seventh or eighth time we've done the Lord of the Rings, and the food there, the meals are all pretty well laid out. That's actually how I got this job, because I wanted to do all the hobbit meals for all three films. So I watched all the movies and went back to the books and planned out the menu, we've only changed it once. With Harry Potter I looked at the books and also studied British food. You know, some of their food is magic.

With something like Julie & Julia, there's almost too much food. One of the first dinners I did was with Ishtar, that was actually when I was still at Mars. It's one of my favorite movies and it was probably the first time it had been screened since it first ran. We did a three course Moroccan meal for that since there wasn't much food in it. But usually I start from the movies and go from there.

How do you pick the films you do dinners for? Does that come from you or are they assigned?
It's hard sometimes just to do, just to say "Oh, I'm going to do this movie and sell tickets," cause it's got to really have a couple of things going for it. Like whether or not it's a good food movie, or whether that audience is going to be willing to come out and go through the extra experience. Like Harry Potter does great, we're selling that out in all the cities we're in.

So what's in the works? Anything exciting, other than the two we've already discussed?
Well, the Lord of the Rings thing is kind of cool because I'm taking it on tour. Once I hone it in Austin, which a lot of times, I mean, going back to Mars, I'm sort of a chef where it's just like, well, I just make the food. There's not really anything else now, I'm putting it together in each one of the cities and train everybody on how to do it so they can do that there.

What else do we have coming up? We're doing a thing for Edible Austin for the Eat Local week, we're doing Chocolat, which we've done a couple times, which is awesome. As you can imagine, I mean, it's a lot of chocolate. The first time we did it I figured out each person was going to consume a pound of chocolate over the course of the movie, which is a lot.

Wow. Over how many courses?
Five. There's one scene where they have the big dinner and she just completely covers a gay man in this chocolate sauce. That's pretty decadent.

Also, The Hill Country Food and Wine Festival asked me to cook a pig for them on the 5th, which I'm pretty excited about. I love cooking a whole animal.

Oh, right, you did that whole steer.
Yeah, that was great. It'd be great to do that again. You know, it's funny, you're so intimidated by something like that. I mean good lord. Nobody ever gets to do that, really. But once we started, we kind of got into it and we're ready to do it again. I know we will, because now I kind of have a better idea of how to cook the meat just a little bit better. Not that it wasn't excellent, but you know obviously on a cow, different parts are going to cook at different rates. I'm going to try to figure out how to do it differently next time, but that was great.

That just came from a phone call from [Alamo Drafthouse founder] Tim [League] about a year ago. Tim called me up and was said, "Would you like to cook a whole cow?" And I was like, "What do you think." Of course I did. It was one of those things we waited for, for I think ten months until we got to do it. Pretty awesome.

The Best Things the Eater Austin Team Ate and Drank This Week: Under-the-Radar Lunch and a Baguette Sandwich

Austin Restaurants Hit With a Slew of Break-Ins

Where to Ring in Lunar New Year With Food in Austin